A Region to Discover: Cap-de-la-Madeleine

Visit Cap-de-la Madeleine, a city rich in history. Experience the magnificent scenery of La Mauricie National Park and the lively atmosphere of the city of Trois-Rivières.

Overview of the region

Halfway between Montreal and Quebec City, Cap-de-la-Madeleine is one of the six sectors that make up the city of Trois-Rivières. It is located in the greater Mauricie region, a vast area of 39,700 km2 that borders the St. Lawrence River and which is dotted with rivers, lakes, and dense forests. The city of Trois-Rivières is the regional capital.

Founded in 1651 by Jacques de La Ferté, abbot of Sainte-Madeleine-de-Châteaudun in France, Cap-de-la-Madeleine merged with Trois-Rivières in 2002. By 1900, the population had reached about 300 families, most of them making a living from agriculture and forestry. With the construction of the railway in 1909 and the establishment of pulp and textile industries, Cap-de-la-Madeleine developed into a thriving town.[1]

Tourist attractions in the region

The city of Cap-de-la-Madeleine is especially famous for its basilica, Our Lady of the Cape Shrine, and for its many historical monuments. Discover Canada's first iron industry at the Forges du Saint-Maurice. Other notable heritage sites include the Ursuline Monastery, the pioneers’ monument, and the Old Prison in Trois-Rivières, some of which can be visited. To learn all about the history of the paper industry in this region, a visit to the Boréalis centre is a worthwhile experience. The Musée POP focuses on the unique identity of Quebec’s diverse and evolving society through dynamic and bold exhibitions.

Our Lady of the Cape Shrine

This imposing basilica was built in 1714 and is the second-largest Marian shrine in North America. Every year, the shrine attracts more than 500,000 visitors. Lush gardens and walkways overlooking the St. Lawrence River make the Shrine one of the most beautiful historic religious sites in Quebec. The octagonal basilica was built more recently in 1974 and showcases magnificent stained-glass windows. Guided tours are available throughout the year.

Erected in 1742 by François Rocheleau who was the “lord” (or seigneur in French) of Cap-de-la-Madeleine, this heritage stone house is located on Notre-Dame Street, opposite the Our Lady of the Cape Shrine, in the historic heart of Trois-Rivières. Originally, it was known as the Jesuit Manor. A permanent exhibition allows visitors to discover the history of Cap-de-la-Madeleine and its pioneers. It covers the period from 1651 to 1854 in particular. This house, occupied by the Rocheleau family until the middle of the 19th century, subsequently took on multiple functions. After major restoration work from 2012 to 2014, it was renamed Rocheleau House.

This industrial complex was established in 1730, the first in Canada. It was used to make iron and cast iron. Located north of Trois-Rivières on the Saint-Maurice River, the ironworks remained in operation for over 150 years. In 1919, it was recognized as a national historic site. 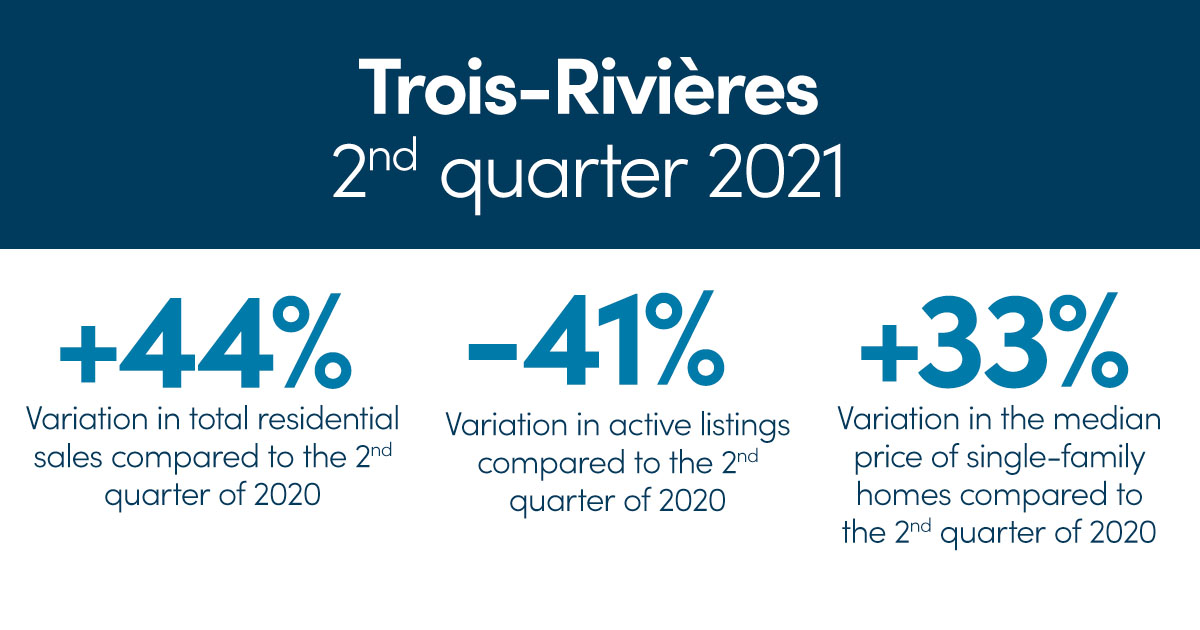 (Cap-de-la-Madeleine is one of the six sectors that make up the City of Trois-Rivières).

The number of sales increased by 44 per cent in the second quarter, totalling 396 transactions.

There were 387 new properties for sale, an increase of 54 per cent, while active listings decreased by 41 per cent.

Sales of condominiums grew by 16 per cent to reach 42 transactions. The median price has continued to climb to reach $179,500, an increase of 21 per cent.

Finally, for single-family homes, there were 256 sales in the second quarter, a jump of 32 per cent and active listings fell by 55 per cent.

Do you want to sell or buy? See the properties for sale and contact a real estate broker.