The Québec Federation of Real Estate Boards (QFREB) recently published a text in its Window on the Market publication in which it presents an update of its study on average condominium prices per square foot. By eliminating the effect of unit size, the statistics permit better comparative measurements of prices in different geographic areas. The statistics presented in this study refer to divided co-ownership transactions registered in 2016 on the real estate brokers’ Centris® system, excluding new constructions. Here are the highlights of this study.

Montréal vs. Trois-Rivières: twice as high

Not surprisingly, in 2016, the Montréal Census Metropolitan Area (CMA) posted the highest prices for condominium transactions according to the net surface area, with an average price of $270 per square foot (see Table 1). In particular, the most expensive condominium markets in Québec were found on the Island of Montréal and in Laval, with average prices per square foot of $320 and $227 respectively. It is also important to note that with an average surface area of 985 square feet, units sold in the Montréal CMA were generally smaller than condominiums sold elsewhere in the province, where the average surface area exceeded 1,000 square feet. 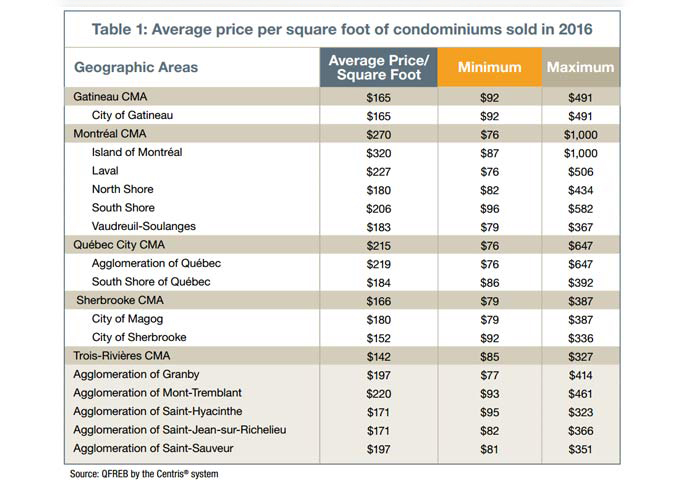 Concrete vs. wood and brick

By segmenting the data by building size, the QFREB found that condominiums in large concrete structures generally have a higher average price per square foot than those found in smaller wood and brick structures (see Table 2). Not only is it a matter of soundproofing, but large condominium buildings typically provide many other benefits such as elevators, services and common areas. Moreover, they are traditionally located in central neighbourhoods sought after by buyers. 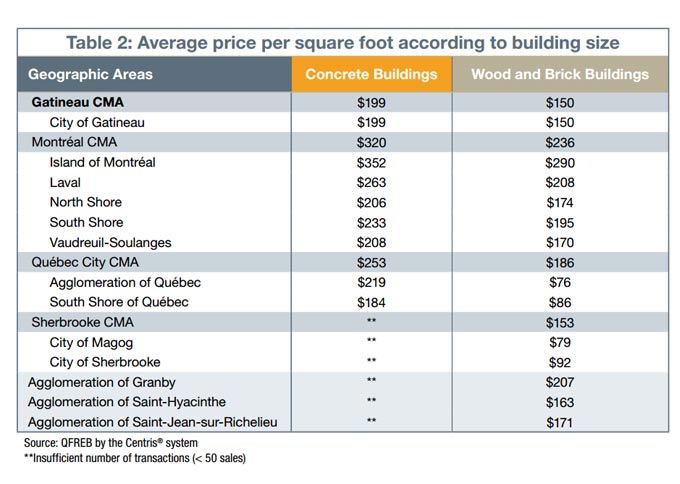 The older it is, the less expensive it is, except that…

By segmenting the data by the building’s year of construction (see Table 3), the QFREB notes that generally in 2016, the newer the condominium was, the higher its price. However, the exception to this is condominiums in buildings built before 1950 in the metropolitan areas of Montréal and Québec City which sold at a higher average price. This is due to the fact that some central, upscale and historic neighbourhoods, such as Vieux-Montréal and Vieux-Québec, post much higher prices compared to the area’s average. These neighbourhoods have many former industrial, institutional and commercial buildings that have been recycled into apartments or lofts.

How much for an indoor parking space?

Finally, the QFREB separated condominium transactions that include one or more indoor parking spaces from those that did not (see Table 4), and excluded from the calculations units that were sold with a driveway, carport, parking permit, etc., but no garage. The QFREB found that condominiums with a garage in the Montréal CMA sold at an average price of $303 per square foot in 2016, compared with $246 for those with no indoor parking space, a difference of $57. The differences in prices for the Québec City and Gatineau CMAs were $69 and $57 per square foot, respectively.

Get the full details by reading the complete Word From the Economist, published by the Québec Federation of Real Estate Boards.