A property’s proximity to public transit is a characteristic that may have value for some buyers, just like a garage or an extra bedroom. The Québec Federation of Real Estate Boards (QFREB) recently a published a study in its Window on the Market publication in which it seeks to quantify the added value that proximity to public transit brings when selling a property. Here are the highlights of this study. 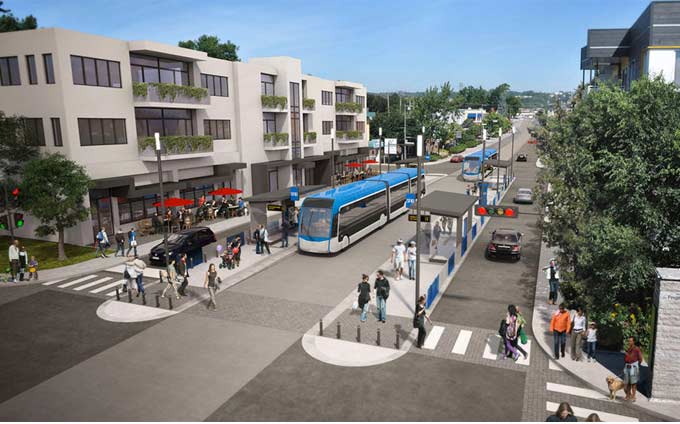 For the Montréal CMA, the QFREB analyzed the effect of proximity to a subway station or a commuter train station on the sale price of properties. For the Québec City CMA, the QFREB performed the same analysis, but regarding proximity to one of the two main Métrobus stations, 800 or 801.

To calculate the effect of proximity to a subway station on the sale price of a property, the QFREB relied on a realistic walking distance between the property and the subway station, meaning 1.5 kilometres (approximately 15 to 20 minutes at an average walking speed).

The blue line (+42.2%) is the one that adds the most value to single-family homes located within a radius of 1.5 km, followed by the green line (+32.8%), the orange line (+28.5%) and finally the yellow line (+11.2%). The results point in the same direction for condominiums, although the impact is less important.

As with subway stations, a 1.5 km radius was used to identify the effect of proximity to a commuter train station on the sale price of properties.

The Métrobus in Québec City

To calculate the effect of proximity to Métrobus stations 800 and 801 on the sale price of a property, the QFREB used a radius of 1 kilometre.

For single-family homes, a property located within a 1 kilometre radius of a Métrobus station sells for 8.7% more, on average, than a property with the same characteristics that is located outside of this radius. This effect is slightly weaker for condominiums, as a condo located within a 1-kilometre radius sells for a price that is 8.1% higher than an identical condo located outside of this radius.

Generally speaking, a property located within walking distance of public transit infrastructure does actually sell for more than an identical property located outside this radius. For the subway in Montréal and the Métrobus in Québec City, the effect on sale price is greater on single-family homes, while for the suburban commuter train, the effect is greater on condominiums. Finally, the QFREB also noticed that the effect of proximity to public transit on property prices drops drastically when the public transit infrastructure is no longer within walking distance. A beneficial effect may still be felt beyond this distance, but much less.

Read the full text of the Word from the Economist, published by the Québec Federation of Real Estate Boards, for all the details.