According to the Quebec Professional Association of Real Estate Brokers (QPAREB), "The first impacts of the strong rise in interest rates are pushing towards a rapid cooling of the market in the third quarter of 2022.'' 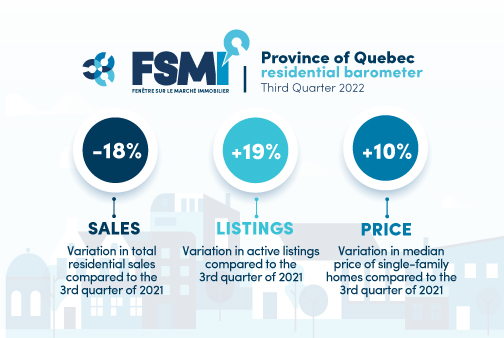 18,141 residential sales transactions were concluded in the third quarter of 2022.

If the second quarter was pivotal in the evolution of Quebec’s market, with median prices for each property category reaching an all-time high, the third quarter was the one that confirmed a sharp change in direction, albeit more moderately than in many other Canadian provinces. The strong consecutive increases of the key interest rate recorded from March to September, of a magnitude comparable to those observed in the early 1990s, stopped the frenetic momentum of the first quarter, which was still palpable in the second quarter.

At the metropolitan area level, transactional activity registered a relatively significant difference in the third quarter of 2022. The Montreal CMA experienced a -23 per cent drop in sales, followed by the Gatineau CMA at -19 per cent. The Sherbrooke and Quebec City CMAs experienced smaller decreases, at -14 per cent and -9 per cent respectively. The Trois-Rivières and Saguenay CMAs experienced some stability (0 and 1 per cent respectively), in part because their level of activity was less substantial than the other CMAs in the third quarter of 2021.

In contrast to the first and second quarters of 2022, sales outside of Quebec’s metropolitan areas experienced a smaller decline than the provincial average in the third quarter of 2022. A total of 3,503 transactions took place in these areas during the quarter, a 14 per cent decrease compared to the third quarter of 2021. The various property categories experienced declines that were very uneven in magnitude, with plexes experiencing a significant drop (-38 per cent) while condominiums (-1 per cent) registered relative stability compared to the decline in single-family homes (-13 per cent).

In the context of a generalized slowdown, only two communities recorded an increase in residential sales, with sales in Mont-Laurier jumping by 21 per cent during the period, while they climbed by 5 per cent in Sept-Îles. The Thetford Mines and Joliette markets (-3 per cent) maintained, or almost maintained, their third quarter 2021 activity levels, despite the increasingly unfavourable provincial context.

Some communities also stood out for the intensity of their residential market’s sales decline. Mont-Tremblant experienced a -40 per cent decline in the third quarter, followed by Rivière-du-Loup (-31 per cent), Charlevoix (-31 per cent) and Cowansville (-30 per cent).

Despite the ongoing slowdown, the number of months it takes to clear the inventory of residential properties on the market is still at a level that clearly favours sellers across the province. The sharp decline in transactional activity has resulted in an increase in active listings that has not been seen since 2015 and the magnitude of which has not been seen since 2014 at the same time of year. In fact, the number of months of available listings on the market is back above the 3 mark in the provincial market.

In a sign of the continuing tensions in Quebec’s single-family home market, the average number of days on the market dropped to 38 in the third quarter of 2022, 7 days less than the low reached in 2021, which stood at 45 for this period.

For more detailed statistics on each of Quebec’s regions, read the QPAREB Barometers and visit https://apciq.ca/en/real-estate-market/